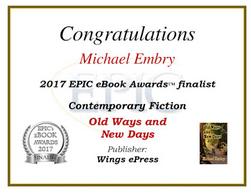 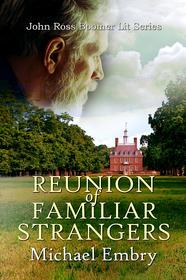 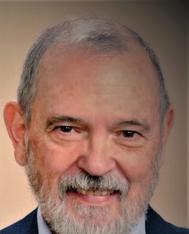 ​Michael Embry is a multi-genre author of 15 books. His latest novel, Reunion of Familiar Strangers, was published by Wings ePress on Sept. 1. It's a sequel to the coming-of-old-age series featuring Old Ways and New Days, Darkness Beyond the Light, New Horizons, and Make Room for Family, part of the John Ross Boomer Lit Novel series.

Make Room for Family, was published on Feb. 1, 2021. By the way, go to the My Books tab if you're interested in purchasing his works.

​The boomer lit novels are about the trials and tribulations of retirement for newspaperman John Ross. They are available at Amazon.com,  BarnesandNoble.com, and Wings-Press.com.

​"Embry’s latest, Reunion of Familiar Strangers, gives the reader a richer and deeper perspective of John as much is revealed about him in his teenage years through his classmates at his 50th high school class reunion." — Michael Hartnett, author of Blue Gowanus, The Blue Rat, and Fools in the Magic Kingdom

A reader might decide within the first few pages of (Make Room for Family) that its title could have been the one tacked over the gate of Dante’s Inferno: “Abandon hope all ye who enter here.” But give John and Sally Ross enough time in any seemingly hopeless situation and hope will win out.— Michael Jennings, author of Ave Antonia

Embry has written three mainstream novels, Foolish Is The Heart, A Long Highway, and The Touch; a murder mystery, A Confidential Man; and two young-adult books, Shooting Star and The Bully List. Embry also has a short story collection, Laments, published in 2012 and available for 99 cents at Amazon.com,B&N.com, and Smashwords.com. He hopes to have a second volume published this year.

Michael has also written three nonfiction sports books, Basketball in the Bluegrass State: The Championship Teams, March Madness: The History of the Kentucky High School Basketball Tournament, and Baron of the Bluegrass: The Wit and Wisdom of Legendary Kentucky Basketball Coach Adolph Rupp. 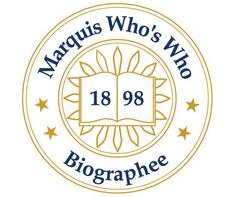 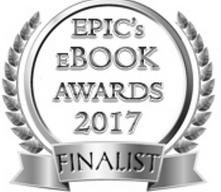 "This novel has such a realistic feel to it. It's not of the thriller genre, but I found myself turning those pages, wanting to know what was going to happen next."

Lara MacGregor, author of The Secret Mask of Truth and The 12th Kiss

"Author Michael Embry leaves us both laughing and crying with his flawed but recognizable characters."

"The best Michael Embry yet...Honest, accessible writing that keeps you turning the pages."

and Darkness Beyond the Light . . .

"His latest, Darkness Beyond the Light, is the sequel to Old Ways and New Ways, each a part of his John Ross Boomer Lit series featuring those born from the years 1946-1964, including Embry. Darkness has a compelling narrative touching on boomer issues such as changing social norms, caregiving of the elderly, and grown children living with parents."

​"Facing harsh realities about a child will not be easy for both John and Sally Ross as their lives are about to be turned in so many directions that at times they will have to literally catch their breaths in order to continue on."—Just Reviews (5 stars)

​"These are supposed to be the golden years for millions of American baby boomers. Only, what happened? Drugs, violence, children who disappoint, and old friends dying are just a few of the issues today’s baby boomers face. Michael Embry ruthlessly explores these problems and many others in his gripping new novel, Darkness Beyond The Light."
Chris Helvey, author of Snapshot, a novel released by Livingston Press

"What's more exciting than a family Christmas with a judgmental, smart-mouthed mother-in-law; a grown son who's got himself into drugs and does everything to hide it, including lying, of course; and a daughter who tries to hide a personal problem by being everything to everyone? That's what John Ross must contend with, plus his wife Sally has become forgetful, but John doesn't have the presence of mind to deal with it because of all the craziness in his house."

​​​​​​“In Old Ways and New Days, Michael Embry masterfully shines a spotlight on retirement and the realities and traumas facing millions of baby boomers. And, like most things lit by the harsh, unfiltered beam of a spotlight, not everything is rosy; just ask John, Embry’s main character, as he traverses his first days out from under the world of work. This book is a must-read for anyone who wants to understand the realities facing retirees or who simply want to become immersed in a well-written, engaging novel.”
Bill Noel, author of Folly Beach Mystery  series