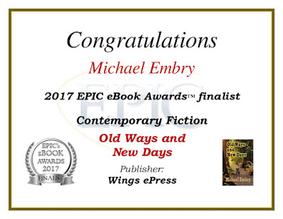 I'm available to participate with reading groups, library groups, and book clubs. Contact Wings ePress to receive discounted books on bulk orders. If you'd like to have me as a speaker, contact me at Michael.Embry@gmail.com to set a time and date.

​Michael Embry was born in Kentucky a long time ago. Among his Bluegrass "hometowns" are Campbellsville, Hopkinsville, Jeffersontown, Louisville, Leitchfield, Lexington, Madisonville, Morehead and Richmond. He also lived in Oklahoma City during his childhood.

Embry attended Taylor County, Hopkinsville and Eastern high schools and Morehead State University and the University of Louisville before finally receiving a degree in journalism from Eastern Kentucky University. He also earned 45 hours in graduate work (special education) from EKU.  He is a veteran of the U.S. Air Force, spending most of his enlistment at Whiteman AFB in Missouri.

Embry is the author of 12 books -- three nonfiction sports books, eight novels, and a short-story collection. His latest novel is Darkness Beyond the Light,  which was published in November 2017.  It is the sequel to Old Ways and New Days, an EPIC finalist for Best Contemporary Fiction in 2016. He is currently working on the third book in the John Ross Boomer Lit series.

He worked for Kentucky newspapers in Richmond, Madisonville, and Lexington and a national news service, making stops in Louisville, New York, Milwaukee, and Lexington. He retired as editor of Kentucky Monthly magazine in Frankfort in 2006. He embarked on a new career path in 2009 when he joined the Kentucky Office of Homeland Security as public information officer. He retired from that position in 2014. He is listed in the 2016 edition of Who's Who in America. He is now a freelance writer and novelist. Besides writing, his passions are travel, hiking, photography, and reading.

Embry and his wife, Mary, live in Frankfort, Ky. They have two grown sons, Justin and Sean, one daughter-in-law, Catie (Sean's wife), and three granddaughters, Lily Sofia and Lola Grace (Justin's daughters) and Ellie Cate (Sean and Catie's daughter). And they have two Chorkies: Bailey, who was born in November 2012, and Belle, born in December 2014.